In Overseas Deals, It's "Their Way or the Highway" 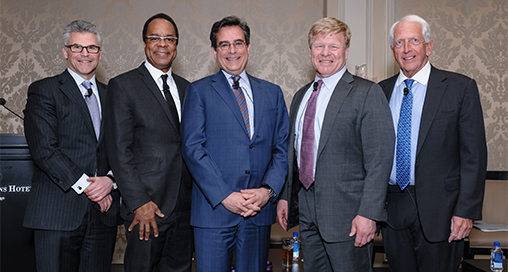 As commercial real estate investors and developers look abroad for opportunities, they must be prepared to immerse themselves in local custom, culture and business. That's the only way to get deals done in foreign lands, according to a panel of experienced international CRE experts.

That was one of the major messages from the panel, titled "Assessing Risk in Cross-Border Deals" at DLA Piper's Global Real Estate Summit in Chicago on May 3, 2016. Led by Wrightwood Financial CEO Bruce Cohen, the panel discussed the unique challenges of international real estate.

Kenneth Himmel, president and CEO of Related Urban, the retail arm of Related Companies, echoed Primo's comments when discussing his forays into international development, which began in 2009, when the US market was mired in recession. Himmel said he made several trips to China, but decided the communications barriers were too steep for a US developer. Then he went to the Persian Gulf, where he found the opportunity to build on a massive scale. Even in places like Abu Dhabi -- where many of his development partners are US-educated and nearly everybody speaks English -- there are local business practices that Himmel said he had to adapt to.

"We learned very early that if you don't have skin in the game, you'll be called a consultant or an advisor," he said. "And then nobody has any respect for you."

That willingness to learn is apparent in the foreign investors who seek to involve themselves in US deals, as well, panelists said. Jeff Barclay, managing director at Goldman Sachs, works with many offshore investors looking to deploy capital in the US. Most often the investors have two objectives: to diversify their portfolio so they have lower home-country exposure, and to learn, so in a few years, they can find and execute deals themselves.

"Whether investors start out as active or passive, an important part of many client relationships is sharing best practices," he said.

Even doing business in the country next door means maintaining a local presence, said panelist Neil Jacob, senior managing director and head of the US of Oxford Properties Group. Six years ago, Oxford was 90 percent invested in its home country of Canada, but today, it has close to 50 percent of its investments in the US and Europe.

"We believe in having real boots on the ground, in being involved, building a platform," he said. "It's important to have a good sense of your strengths, be willing to partner, where appropriate, or go it alone."