From CRE to NFL: Related Companies' Stephen Ross Still Knows Opportunity When He Sees It 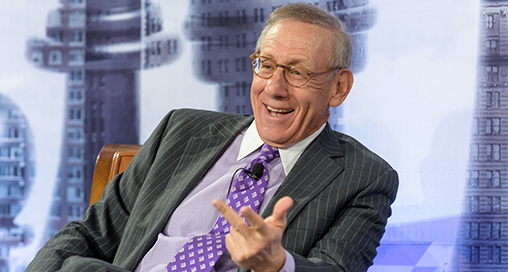 How often does the NFL Draft come up in commercial real estate conversations? Not very, unless you're talking to Stephen Ross, chairman and founder of Related Companies and co-owner of the Miami Dolphins.

And sure enough, during his keynote conversation at DLA Piper's Global Real Estate Summit in Chicago, Ross both expounded on the business where he's built a fortune and explained the Dolphins' selection of Laremy Tunsil in the previous week's draft. Tunsil had been projected to be the top pick; after video surfaced of the University of Mississippi star smoking marijuana, 12 teams passed on offering him a contract. But not the Dolphins.

"How could you run a business and not take the No. 1 player?" Ross asked the 600 attendees at the summit's keynote presentation.

That keen eye for opportunity has driven his success in real estate as well, and it was a key theme in his sweeping discussion with moderator Michelle Felman. The conversation also touched on Ross' larger projects, his company's diversification and the need for affordable housing — a Related Companies priority since Ross founded the company in 1972.

Affordable housing
Affordable housing is an increasingly hot topic across the United States, often reaching a fever pitch in gateway cities such as New York, Chicago and San Francisco. Asked how he would address the need in those markets, Ross said he would prohibit conversion of affordable housing to market-rate, and noted that buildings in such cases were often constructed with government subsidies and should be reserved for low-income residents.

"I'm a capitalist, and I believe in capitalism, but I think the future of the country is more important," he said.

Hudson Yards
The largest private real estate development in US history, Hudson Yards will provide office space for 125,000 people and include more than 17 million square feet of commercial and residential space when it is completed in 2024. Ross noted that 7 million square feet of office space has already been leased to "some of the best tenants in New York," including Time Warner, Wells Fargo, KKR and several law firms.

The project is of such scale that, on the west side of Manhattan, "you think you might be in Dubai when you see all the cranes," he remarked. "Building something of that magnitude as a real estate developer is something you can only dream about."

He also described the project as a vision for the future of cities. "The whole concept is creating a city within a city, which is a great example of what a sustainable city is all about," Ross said. "We're really excited about it."

Equinox's expansion
The Hudson Yards site will include the first Equinox-branded hotel and spa, an expansion of the chain of high-end gyms. Equinox will also manage the hotel at the Grand Avenue Project in downtown Los Angeles, another Related Companies development project.

Related Companies purchased Equinox Fitness Clubs in 2008. Ross said he saw the opportunity when Equinox officials were looking to go public and asked him to serve on their board of directors.

Combatting racism
Ross concluded his remarks with a discussion of the Ross Initiative in Sports for Equality (RISE), a nonprofit organization that works to promote understanding, respect and equality and to harness the power of sports to advance race relations. The commissioner of every major American sport is on RISE's board.

Ross, a Detroit native, said he founded RISE in 2015 because he saw problems in his hometown and wanted to help.

"No one has really used sports to create change, and it has all the ingredients to allow that to happen," he said. "Our issue is strictly racism, because, to me, it's one of the big issues no one wants to talk about."

Wrapping up the presentation, Ross was asked about advice he'd give to someone today trying to follow a path like the one he started down 44 years ago.